The Olof Palme Prize 2008 is awarded to Dr. Denis Mukwege for his work for peace and human rights in the Democratic Republic of Congo (DRC), one of the world’s most conflict ridden countries. In a region where man’s most brutal sides are shown in the violence against women and its proportions have reached unimaginable levels, Dr. Denis Mukwege has made it his life work to unceasingly fight in the opposite direction. The Panzi Hospital, founded and headed by Dr. Mukwege, serves peace, understanding and solidarity in a way worthy of imitation through the work with the women who are the most exposed victims of this conflict.

His work merits worldwide acknowledgement as an admirable example of what courage, persistency and enduring hope might accomplish for human rights and dignity in times when these values seem the most distant. 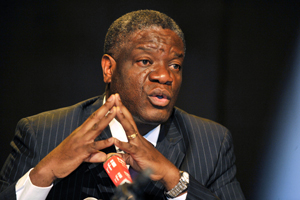