We live in a time where technical development is advancing at an extremely fast pace, but where we also experience a backlash of humanity and reason in the form of continued wars and repression, questioning of democracy, and spreading of prejudice, lies, and hate, even in the midst of – as we have understood it to be – the enlightened and developed part of the world.

Democracy is under strong pressure, not to say, under attack, from dark forces. We see this in the increasingly divided United States of America, as well as in the European Union, where certain governments are violating the democratic and social purposes of the Union.

Regrettably, nor has our own country escaped these sort of negative currents, in fact, even our Parliament is harboring members – now and then armed with iron bars – who are sullied by a racial past and who distinguish between people, speaking of citizens in terms of Swedes and not “real” Swedes. They thereby deny not only the inclusive rights of citizenship but also the acknowledged national minorities in our country: Jews, Roma,

It is in times like this, in our time, that we need human kindness and citizens like you Hédi Fried and Emerich Roth. Both of you – and your families, relatives and friends – have experienced the worst form of human action. Your grief and your suffering are beyond our imagination, but you have emerged unconquered in order to enlighten and remind us, and to participate yourselves in the formidable task of fighting against evil, and ignorance, cold heartedness, and indifference.

You are not alone in this struggle, it is the duty of all of us as human beings and citizens, and your stories and actions can be our model and inspiration for understanding, tolerance and hope for the future.

Antisemitism means prejudice and hostility towards Jews because they are Jews. You, Hédi, illustrated this with a grim humorous story which was told during the war: Jacob asked Daniel: “Who started the war?” And Daniel answers: “The Jews and the cyclists.” “Why the cyclists?” Jacob asks. “Why the Jews?” Daniel replies.

But antisemitism is no joke. It can appear as anything from rather mild prejudice to violent hate and end up in expulsion, deportation and genocide.

Hatred of Jews, as well as hostility towards immigrants, and in particular Muslims, are central in many right wing extremist and ultra-national movements and parties. Antisemitism still constitutes the essence of the ideology and propaganda within the so-called white power movement.

Thus, we are today forced to ask the question: How is it possible that eight decades after the Nazi genocide, there are still people who can deny the Holocaust, who slander Jews, who are even permitted to march in our streets with photos of named Jewish Swedes with the indirect call for violence  against “traitors”? These people, and others of the organized preachers of hate, must be fought by all legal and political means.

In his book “We go to Sweden” about the White buses, Sune Persson called the Count Bernadotte-led rescue action in Germany as “probably the most important and humanitarian deed that Sweden has accomplished in all of the 20th century”.  Steven Koblik, the American scientist, described the expedition as “with no comparison the greatest and most successful of all rescue endeavors on German soil during the war”.  This is how around 30 000 lives were saved that year.

Today there are few survivors of the Holocaust left. Those of us who met war refugees, are also becoming fewer. In 1945, six years old and horrified, I saw emaciated human wrecks, walking phantoms, coming to live at our small hotel in Malmoe. At that time, when the white buses drove through the streets, people along their way applauded. Home-guards then had to watch the refugee camps, not to protect them from violence, but to prevent the citizens of Malmoe from throwing all the food packages that they wanted to give. I went to the same school as Helmer Fischbein, who later became active in the Jewish congregation in Malmoe. Helmer’s parents alone received eighteen refugees in their home (I am glad that you and Alona could be here today.) This is how around 30 000 lives were saved that year.

Many other war refugees had arrived in Sweden before April 1945. About 70 000 children had been evacuated from Finland, tens of thousands of Danish and Norwegian members of the resistance, as well as 30 000 Baltic refugees came in the fall of 1944.

In addition to that almost 99 per cent, nearly 8 000, of the Danish Jews were saved in boats over the Sound. At the end of the war there were about 18 000 Danish members of the resistance, ministers, civil servants, officers, and sick persons here in Sweden. In total, around 50 000 Norwegian refugees crossed the border during the war, nearly half of all Norwegian Jews and 12 000 policemen, who were being trained in Sweden.

When Olof Palme on Christmas Day 1965 held his first speech on refugees and migration, about 400 000 refugees lived in Sweden, 150 000 of whom were from the Second World War. Two decades later, between 1985 and 1995, another 400 000 refugees, mainly from the wars in the Balkans, applied for asylum in our country.

Olof Palme said that 14 000 Jews were received in our country when the concentration camps were opened, but reminded us of how students at Uppsala University earlier had protested against what they called racially alien elements, when a few Jewish doctors from Austria had applied for jobs in Sweden. In his speech he emphasized that the attitude towards immigrants of individual human beings was crucial to successful integration in society. Our commendable solidarity with the poor and oppressed of this world must be accompanied by “internationalism in everyday life” That is how we can prove our ideals to be a living reality. “There must not be us and them – there are only us.”

These days it is important to remind people of the fact that most of those seeking asylum in Sweden and Europe today, are exactly that: war refugees, fleeing for their lives from mortal danger. Almost 5 million Syrians have fled abroad, over 6 million are refugees in their own country.

The Danish writer Carsten Jensen, who received the Olof Palme Prize of 2009 observes how fickle our spontaneous solidarity could be. He writes: “The victims of the bombardments in Aleppo have our sympathy, but when they start moving through Europe, they lose it. What is happening in the meantime?” he asks, and answers: “We have robbed them of their innocence and instead we are insinuating that there are shady motives behind their flight. First we whisper it, then we say it aloud.”

Let us remember that the Universal Declaration of Human Rights of the United Nations will be 70 years this year and that the First Article states that “All human beings are born free and equal in dignity and rights”, and Article 14 declares that : “Everyone has the right to seek and enjoy in other countries asylum from persecution.”

In other words: it is a human right to seek asylum from persecution.

So what can we do?
Hédi, in your first book, you widen the perspective on the different shapes of genocide: the extinction of Jews, but also “the widespread murdering”, as you called it, of gypsies and homosexuals during Nazism, about the colonial Germany’s mass murder on Hereros in South West Africa, and in the recent massacres in Sreberenica and Rwanda.

You survived with your sister Livia, and came to Sweden after a dark family tragedy and unspeakable hardships. According to your experience “good and evil exist side by side, separated only by a thin veil, and this we must recognize.” Thus, you write, the important thing is “to fight against prejudice and get to know your own prejudice, in order to act it out.”

And you, Emerich, is following the same theme.

You survived five different concentration camps. You were one of the founders of Association of Holocaust Survivors in Sweden, and Exit, an organization helping young people caught up in destructive environments, and preventing new recruitment. During the last 20 years you have been lecturing in Swedish schools about the mechanisms of hate – in order to hinder hatred, violence and xenophobia, and you have published among other books, the important “The Way out of Hatred” which is being used as a textbook in Swedish schools.

You write that “a new-born child is like an empty vessel which can be filled by love or hate. The way we mould our children from the moment they are born decides their future”. To you society’s investment in education is most important of all. You summarize your message to us all in this beautiful poetic sentence: “The future sits at the school desk five days a week”.

That is why I am pleased that such a large part of the grants awarded by the Olof Palme Memorial Fund supports that kind of work. Since its start in 1987 over 2 300 projects have shared over 50 million crowns, and most of them have been carried out by school children and other young people. Many of these projects have focused on studies, often by means of travels to the sites of different concentration camps, to learn and spread information and suggest measures to resist antisemitism, racism, antiziganism, and islamophobia.

Among the receivers of grants are Musicians without Borders for their project We remember, which is a concert in memory of the victims of the Holocaust with Jewish music, Klezmer music Sephardic songs and gypsy music. Among the performers are Jovan Rajs, Hans Caldaras, Hayati Kafe and Stalhammar Klezmer Classic Trio, who are soon going to play for us here.

“The 2017 Olof Palme Prize is awarded to Hédi Fried and Emerich Roth for their indefatigable contributions as defenders of the equal value of every human being, and for their life-long and exceptional educational work against Nazism, racism, violence and prejudice.

Marked by their unspeakable experiences of the Holocaust, they – like many Jews and other survivors of the Nazi death camps – lived a life of tension between their devastating trauma and their strong will to live on and tell the world of their experiences, in order to spare new generations from the collapse of humanity and democracy.

So thank you all for coming to honour our prize-winners and thereby also all other survivors!

The greatest homage we can pay to you, Hédi and Emerich, is to follow your example: to stand up for human dignity in deeds. Words are not enough: we must assume the responsibility ourselves.

And if you, Hédi and Emerich, can do it, why would not all of us be able to do it.

Peace begins at home.
But the struggle for solidarity and justice in our own country is unavoidably tied to the situation in the rest of the world. Inner and outer peace belong together. 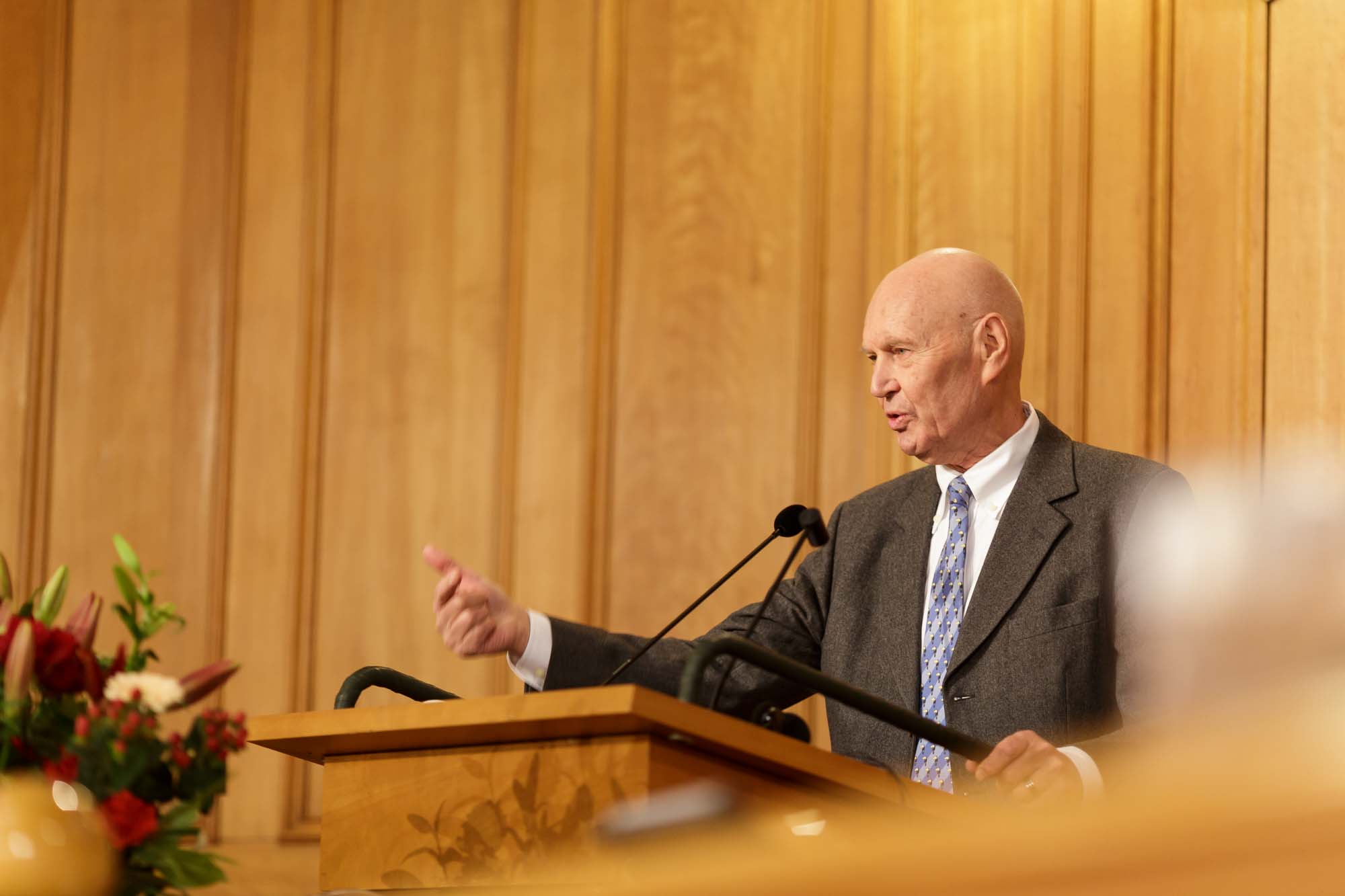