The 2011 Olof Palme Prize is awarded to Lydia Cacho from Mexico, and Roberto Saviano from Italy, for their tireless, selfless and often lonely struggle for their ideals, and for the benefit of fellow human beings. They are individuals who with extraordinary courage are acting despite the risk to their lives. They remind us of the necessity to direct our attention toward countries that we would otherwise regard as democracies, countries in which particularly women and children are cruelly exploited, enslaved and destroyed by global criminal networks, which in turn also threaten democracy itself as a system.

Lydia Cacho is a Mexican feminist, human rights activist, journalist and writer, noted for her accusations of corruption among Mexican politicians and businessmen. In 2005 she published her documentary book ”Los demonios del Edén”, which reveals a pedophile network with ties to persons of high station in the community. She also founded the organization ”Centro Integral de Atención a las Mujeres” (CIAM) against the oppression of women. Her latest book, ”Los demonios del Edén’, about global human trafficking, was published in Swedish in 2011.

Roberto Saviano is an Italian writer and journalist who in his book ”Gomorrah” revealed the Camorra mafia organization to a wider public. In an essay included in his book, ”La Bellezza el’Inferno” (2009), he pays tribute to the murdered Russian journalist Anna Polikovskaja, who in 2004 received the Olof Palme Prize. His latest book ”Vieni Via Con ME”, are stories based on his experiences and knowledge of the influence on Italian society by the Italian mafia.

Saviano is living under a permanent death threat, and has bodyguard protection. 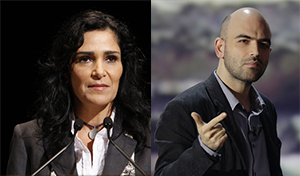