They are awarded the prize because both of them have carried out energetic and dedicated work for human rights, peace and security.

Kofi Annan, Secretary General of the United Nations between
1997 – 2006
During ten years, Kofi Annan has led the United Nations with courage and involvement. In the spirit of Dag Hammarskjöld he has striven to make the UN live up to its full responsibility for the maintenance of international peace and security. His fight for human rights, and his way of stressing that development is a necessary part of the work for security, has left indelible traces in the world organization. During difficult periods, Kofi Annan has given proof of the utmost integrity, and he has defended the UN principles and international law when these were challenged by the mightiest authorities.

Mossaad Mohamed Ali, lawyer and defender of human rights in Nyala, South Darfur, in the Sudan.
Mossaad Mohamed Ali is coordinator of The Amel Centre for the Treatment and Rehabilitation of Victims of Torture in South Darfur, which gives legal help and medical and psycho-social assistance to victims of torture and sexual violence, and to those risking cruel, inhuman and debasing treatment, including the death penalty and amputations. His involvement has concerned hundreds of thousands of war victims in the camps surrounding Nyala since the escalation of the war. For over ten years, Mossaad has been an outspoken and courageous critic of crimes against human rights that were inflicted on the most exposed people of Darfur, both in Sudan and internationally. 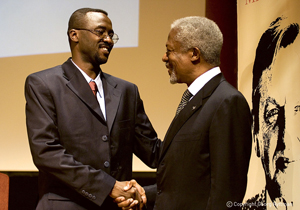